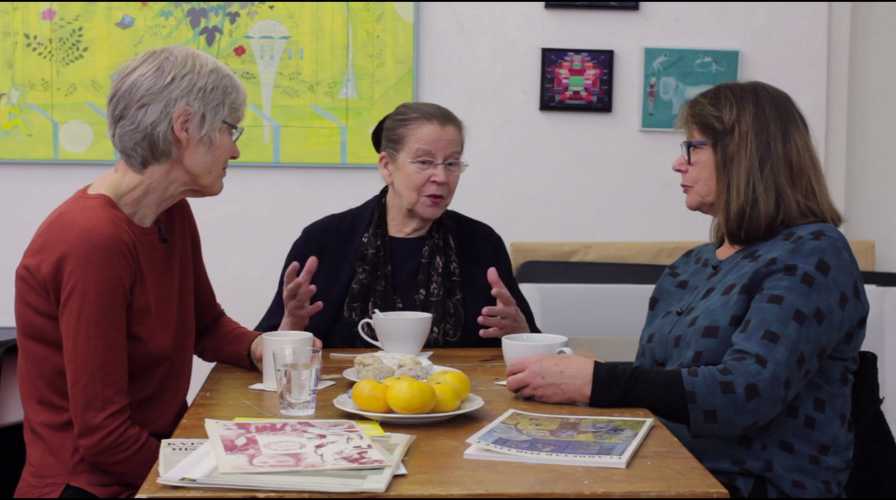 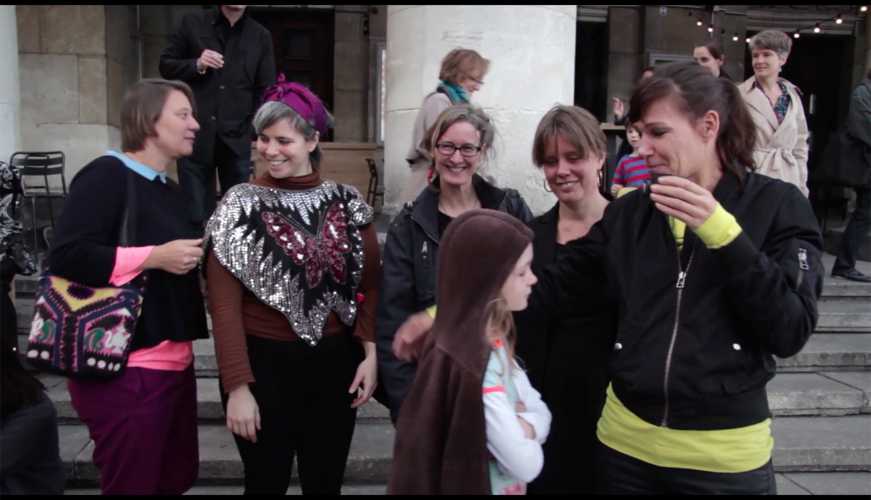 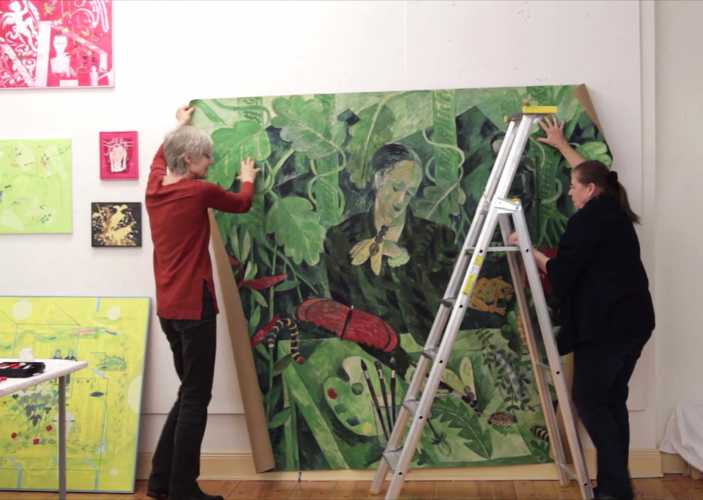 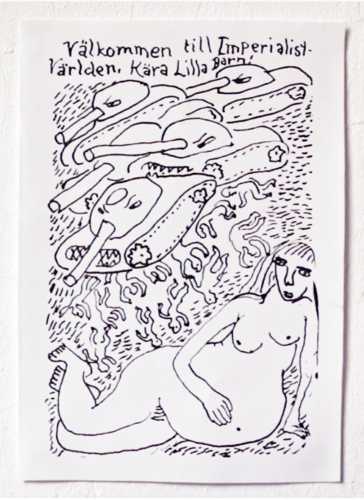 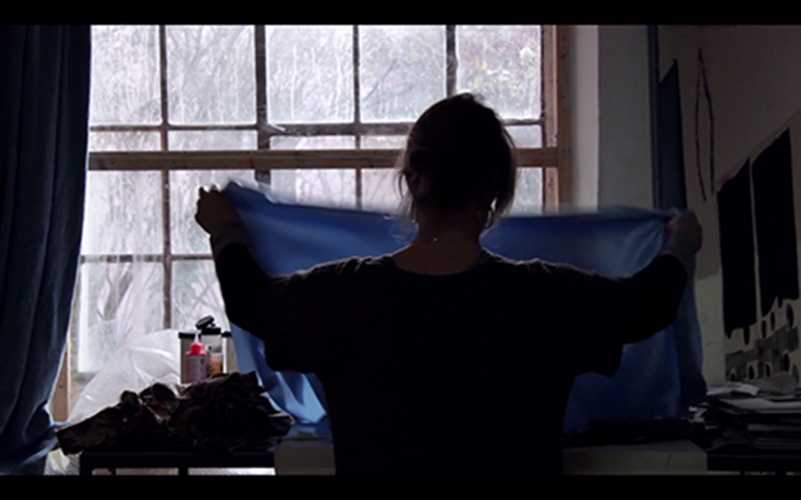 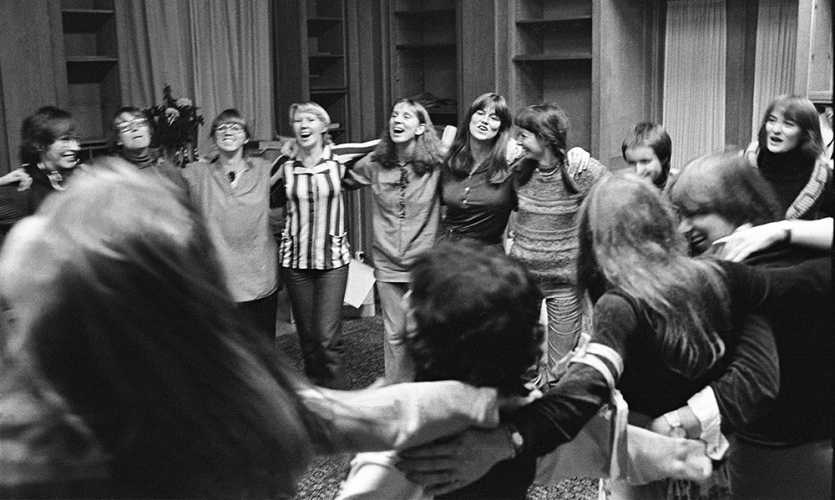 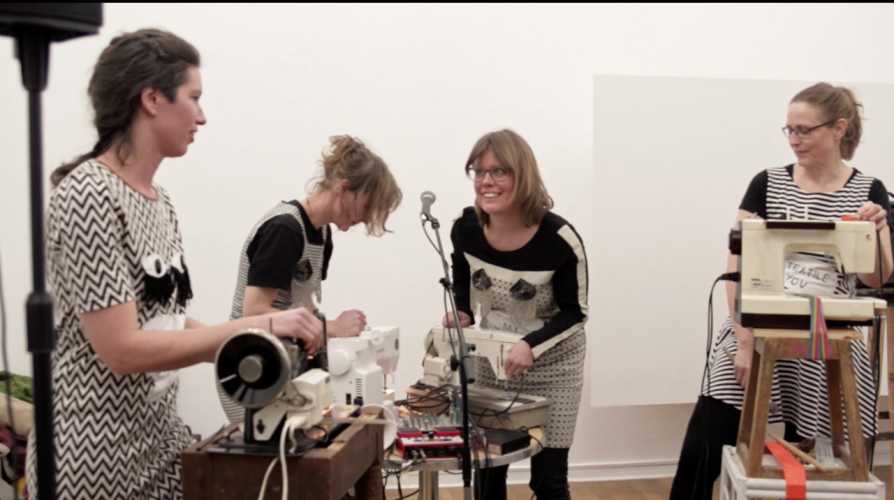 The film is a personal search for traces of the feminist movement of the 70s in today’s art. As a young artist, Gittan Jönsson was active in groups criticising the absence of women in the public artscene. They fought for equal conditions and an expanded concept of art through actions like the Festival of Women’s Culture at the Old Parliament House in 1977 and We Work for Life at Liljevalch’s in 1980.

When Jönsson moves to Berlin later in life she is surprised by male dominance in the German artscene, which is reminiscent of the situation in Stockholm in the 70s. When she meets her old colleagues, shared memories of an euphoric time as activists awaken in them all.

The film ties a group of younger artists in Berlin, members of an international network, ff, with the older artists in Stockholm. Conversations transcend time and space when the women in Berlin and Stockholm show their art and share their experiences and strategies within the patriarchy.

The film clearly shows how the intensive fight in the 70s was soon forgotten. This is also the case with the large women’s exhibition in Berlin, 1977, Künstlerinnen International, which appears towardthe end of the film.

The film asks, “Has the journey to equality in art stopped completely?”.

“It is an important film, as a historical document and as the starting point for an urgent and current conversation. Above all, it is full of acute reflection over the battle that the women’s movement of the 1970s thought had been won, but which the #metoo movement clearly indicates must be fought again. There is just one thing to say: see it!”

Text about the artist, from Gittan Jönsson retrospective ‘Parallella linjer’ at Marabouparken in 2016. Text by Bettina Pehrsson, director and curator.

Gittan Jönsson’s artistic career spans more than six decades. With the recurring themes of power structures and social relations her work is as willful and strong as it is topical. She is an artist who affects us all; an artist who dares to be political and personal, an artist who gives the big events equal billing with the small. Nothing is too simple to be of importance. The first major retrospective presentation of Gittan Jönsson’s work, the exhibition culminates in the new film Parallella Linjer [Parallel Lines], in which the artist searches for traces of the feminist movement in Stockholm and Berlin and wonders what became of all the rebellious efforts and actions.

Gittan Jönsson grew up in the 1960s with the peace movement, protests against the atomic bomb and solidarity with the struggle of the black people against apartheid in South Africa. When she was 19 years old she moved from Helsingborg to Stockholm and began studying at the advertising programme at Konstfack, University College of Arts, Craft and Design, which was also characterised by the spirit of the times and focused on a larger community involvement. In the zeal to change the world and stop US imperialism in Vietnam, Gittan Jönsson joined Rebellrörelsen [The Rebel Movement], which soon developed into a sect of Maoists who believed they were in the forefront of the next revolution. The movement came to a sudden and dramatic end. As a way of processing their experiences, Gittan Jönsson and three of her fellow students, Annika Elmqvist, AnnMarie Langemar and Pål Rydberg, produced Historieboken [The History Book], a socialist cartoon book that relates the history of Europe and Africa, depicting the emergence of colonialism and imperialism from the perspective of the workers. Published by Ordfront in 1970, it sold 70,000 copies and was translated into six languages. Historieboken received international recognition and in the 1970s it formed part of the teaching material for many history teachers. The exhibition features an animated version of the book by the Danish filmmakers Jannik Hastrup and Li Vilstrup (1975).

After graduating from Konstfack, Gittan Jönsson worked as an illustrator for newspapers and journals including Dagens Nyheter, Kamratposten, Vi människor and Kvinnobulletinen. She was also active in the design company Mah-Jong and produced their mail order catalogue. At one point during the Vietnam War, when Hanoi was bombed by the United States, the Mah-Jong images on the billboards in the metro were exchanged for press images of the bombing.

In the 1970s after having her first children, Gittan Jönsson gained a greater understanding of the prevailing gender inequality and discrimination against women, not least in the art world, which shifted the focus of her political commitment to the women’s movement. Gittan Jönsson was one of the organisers of the three-day Kvinnokulturfestivalen [The Women’s Culture Festival] that took place in the empty Parliament building in 1977. This was followed in 1980 by one of the major manifestations of feminist art, the We Work for Life exhibition at Liljevalchs, Stockholm. Gittan Jönsson was an active musician who had her own band Lava, appeared in backing groups, wrote lyrics and produced the cover for the 1972 album Sånger om kvinnor [Songs About Women].

After working on Historieboken with its overtly political message, a need arose to show more private pictures, dealing with the conflicts of family life, the role of women and the complicated mother image, such as the 1972 portrayal of Den ensamma mammans semester [The Lonely Mother’s Holiday] where, with only the Hoover for company, she sits alone by the window longingly looking at the road leading out into
the world. The now iconic painting Diskkasterskan [The Dish Thrower] is simultaneously a coming to terms with and a tribute to her father who competed in discus and to her housewife mother, who represented the trivialities of the everyday, washing the dishes and vacuuming, which never gave rise to any headlines. Gittan Jönsson returned to her parents in later works in depictions of life and death, in sorrow and the regret of losing them.

Like many women artists of her generation, Gittan Jönsson depicted her own experiences, describing her own reality and women’s invisible history. Prinsessor utan panik [Princesses without Panic] (2005-2007) is a poignant and accurate exchange of letters in comics form between Gittan Jönsson and Kristina Abelli Elander about the fictitious Princesses Birgitta and Kristina, named, just as Jönsson and Abelli Elander were, after the Swedish Haga Princesses (Birgitta and Christina). The title refers to the joint Gesamtkunstwerk Prinsessan Panik which was their contribution to the 1980 exhibition We Work for Life at Liljevalchs. The comics blend the artistic with the private, the present with the past; the political with the personal and depicts life in all its phases with disarming humour. The correspondence provides an accurate description of the feminist struggle of the 1970s and the male domination of the art world. Gittan Jönsson’s alter ego Dammsugerskan [The Hooverer] takes the feminist struggle further in her eagerness to not only remove dust in general, but to clean up in the bigger picture – make the world a better place, tear down walls and make the environment and the air cleaner and easier to breathe – in the art world and the world at large.

Since the 1970s, Gittan Jönsson’s painting has gone through many phases, serving as a way of filtering the world and as a place to reflect on her own situation. For Gittan Jönsson, it was film that opened the way for a new pictorial language and a focus on painting. Working as a property manager and assistant to, among others, Carl-Johan and Marie-Louise De Geer (Ekman) on the film Hello Baby and to Jan Troell, she became aware of the mixture of illusion and authentic realities in which perfectly conceived film scenes are bordered by chaos and technology behind the stage design. The work Tiden och rummet [Time and Space], 1975, is one of many examples of how she uses the pictorial space as a stage set to convey the
experience of inner tension and conflict.

With a comprehensive survey of Gittan Jönsson production over the years, it becomes apparent that she is an artist who botanises among styles and expressions, never allowing herself to be defined or explicitly identifiable. There is only one year between Gittan Jönsson’s Självporträtt from 1977 and Diskkasterskan from 1978. Placed next to each other, it is difficult to believe that the paintings were made by the same person. While Jönsson’s self-portrait is painted in a factual, realistic style reminiscent of Ola Billgren’s paintings from the same era, Diskkasterskan is executed in a pseudo-futuristic style. A deliberately chosen technique for transforming an illustration on a parmesan cheese packet into a painting of a rebellious housewife.

In later her paintings, Gittan Jönsson’s interest in formal aspects becomes apparent. We see how, in a more explicit way, she explores the surface and how it can serve as a site for a reflective form of painting. Her political commitment is evident, as is the self-referential dimension, but now as part of a painting that is more oriented towards various painterly strategies.

In Gittan Jönsson’s paintings, maps and diagrams are mixed with elements of abstract painting and swathes of flowing colours. The painting covers larger areas and has become an interest in itself. Styles that were previously varied in different paintings now return as parts of an individual work. Both factually and visually there are clear references to artists such as Franz Ackermann and Julie Mehretu, two painters who use their canvases as a surface to reflect on places and how they appear to us in the form of maps, tourist brochures, economic and infrastructure systems. Gittan Jönsson uses similar materials in her works, especially from her new hometown of Berlin and she always allows historical events to intrude. In both the large scale with references to Rosa Luxemburg or Wilma Rudolph and on the smaller, more private scale in the painting Mah-Jong from 2014 in which Jönsson allows elements of her earlier works to visit the paintings. Gittan Jönsson creates a woven fabric of thousands of invisible threads that give meaning and links her own life with the world around her.