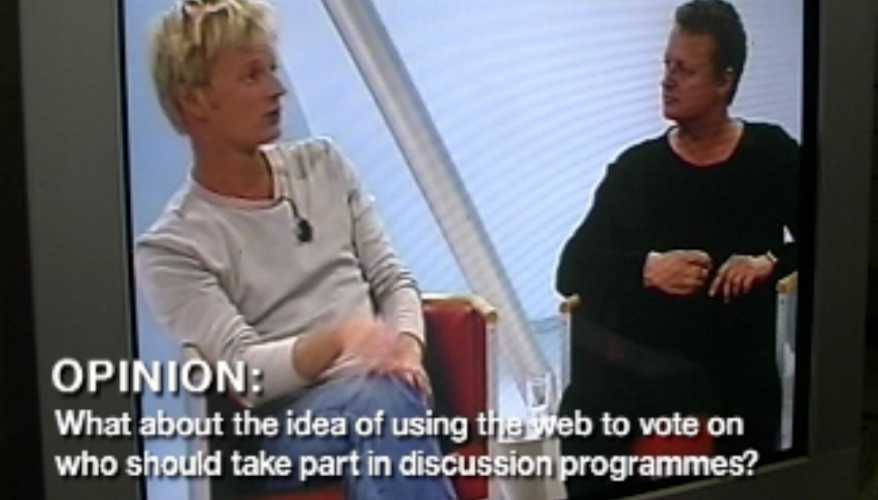 The video presents Måns Wrange’s long-term project The Average Citizen, whose aim is to infiltrate society with the opinions of an average citizen by persuading representatives from the most opinion-forming channels – such as media, politics and culture – to disseminate her opinions in their appropriate contexts. The video also presents an example of the lobbying process in which one of the opinions is introduced to the viewing public by being secretly planted as a line in the script of a highly popular television programme.﻿

Born 1961. Wrange is an artist who has, since the mid 90’s, written several articles and essays on video art in periodicals, catalogues and books. He has lectured on the history of video art at the Modern Museum, The House of Culture, the Cinematek, Stockholm’s Film festival and The Museum of Umeå University in the north of Sweden. He has also been an active member of Video Nu (direct translation: Video Now) and has been one of the founding members of the organizations FEB (direct translation: The Society for Electronic Visual Art), MAP, VAVD Editions and the video section at Stockholm’s Film festival. Wrange has taught video art at Video Now, Kulturama, RMI Bergh’s School of Communication, University College of Arts Crafts and Design in Stockholm. He has been a visiting lecturer at several Art Colleges in Sweden. Since 1998 he has been professor at the Art Institution of University of Art Craft and Design. He has exhibited his own art works at The Modern Museum, Manifesta 4 (Frankfurt), InSite_05(San Diego/Tijuana), Institute of Contemporary Art (London), Kunsthalle Wien (Wien), Shirn Kunsthalle(Frankfurt), Museo Tamayo(Mexico City), Museum of Contemporary Art (Chicago), South African National Gallery (Cape Town), P.S.1 Museum(New York), Der Appel(Amsterdam), Museum of Contemporary Art (Zagreb) and Santa Monica Museum of Art (Los Angeles).www.manswrange.com