Peter Weiss film Tagning Övind Fahlström will be looped in the exhibition “Party for Öyvind” at Musuem Tinguely between February 16th – May 1st. The exhibition has been curated by the Barbro Schultz-Lundestam and Gunnar Lundestam together with Andres Pardey. 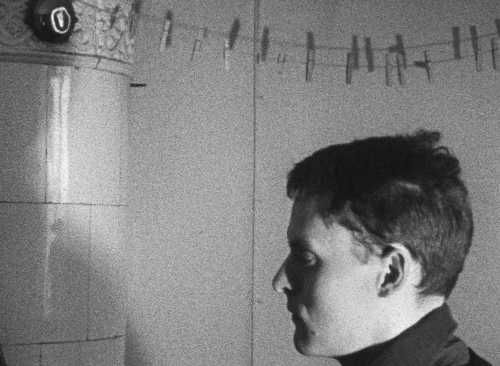 This large group exhibition focuses on the work of one of the most innovative and proactive artists of the 20th century: Öyvind Fahlström (1928-1976) created an oeuvre that broke boundaries in every respect during his short creative period. This unique exhibition comprises fine art, poetry, theatre, literature, music, dance, and film, and so reflects the enormous range and breadth of expression of the international network of artists that inspired, and was inspired by, this singular Swedish artist.

The title of the exhibition quotes an invitation sent out by Patty and Claes Oldenburg, who in 1967 threw a party to celebrate both Öyvind Fahlström’s birthday and his first solo show at the near-legendary Sidney Janis Gallery in New York. The party was a major event with several hundred guests, many of them fellow artists whose works feature in our exhibition.

Öyvind Fahlström was born to Scandinavian parents in São Paulo, Brazil, in 1928. In July 1939, aged just ten, he travelled to Stockholm to spend six months with his relatives. As the outbreak of the Second World War prevented his returning to Brazil, he spent the remainder of his childhood and adolescence with an aunt in Stockholm. After the war, he studied art history and archaeology in the Swedish capital as well as in Rome. On moving to Rome in 1952 he immediately immersed himself in the local art scene, creating his first works and befriending fellow artists such as the painter Giuseppe Capogrossi, whose handling of signs and symbols was an important inspiration for the much younger Swede. Fahlström also wrote reports on Rome for the arts and culture pages of Swedish newspapers – among them pieces on Robert Matta and Cy Twombly.