Salad Hilowle’s film Erinra will be looped in the exhibition Sun Republic at Studio Gallery BWA, Warsaw this summer between June 22nd – September 7th. The exhibition that forms part of the New Horizons International Film Festival has been curated by Ewa Szabłowska and Stach Szabłowski. 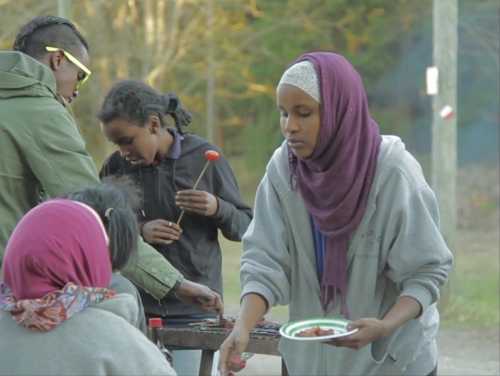 The exhibition is devoted to the place that the global North occupies in collective imagination. Together with the artists, we are looking for this place at the intersection of migratory routes, economic discourses, ecological processes, existential experiences, new political myths and old solar rituals. The waypoint in this search is the figure of the polar Sun which sheds cold light on the picture of today’s world, currently undergoing polarity reversal.

We are all children of one Sun. It is a universal symbol and keystone of earthly reality. However, even though there is one Sun, many other suns exist at the same time. The Sun scorching areas once known as the Third World, now dramatically afflicted by climate change, shines in a way which is different from the one under which tourists sunbathe in tropical holiday paradises. The rhythm of the Sun moving in the sky of the global South is different from that of the global North.

And the symbolic polarity of concepts of the world are drawing closer to the geographic poles of the Earth. The North, once at the cold and inhospitable periphery of the civilisation, is shifting towards the centre of the discourse. In political and social terms, it is perceived as a dream come true, a dream of history moving towards a happy ending, a finale in which democracy and human rights prevail, living standards are high and energy sources – clean and renewable. Contemporary Scandinavia is the best embodiment of this fantasy.

But the vision of the end of history as a happy ending overlaps with a different narrative about the end of time – the prospect of a climate catastrophe. The image of the global North as a cold paradise on earth is contrasted with the nightmare of the South as a living hell tormented by the heat, political instability, violence and poverty aggravated by the price which the inhabitants of this region of the world must pay for the well-being of the rich North.

Globalization has cast the North in the role of a figure of socioeconomic utopia. As a region of the world, in turn, it is defined by the Sun, which during the winter solstice does not rise above the horizon, and which never sets during the summer solstice. The exhibition combines different dimensions of the North – solar and social, ecological and existential. We look at the northern Sun to see how its rays draw the landscape of today’s reality, as well as scenarios for the future.