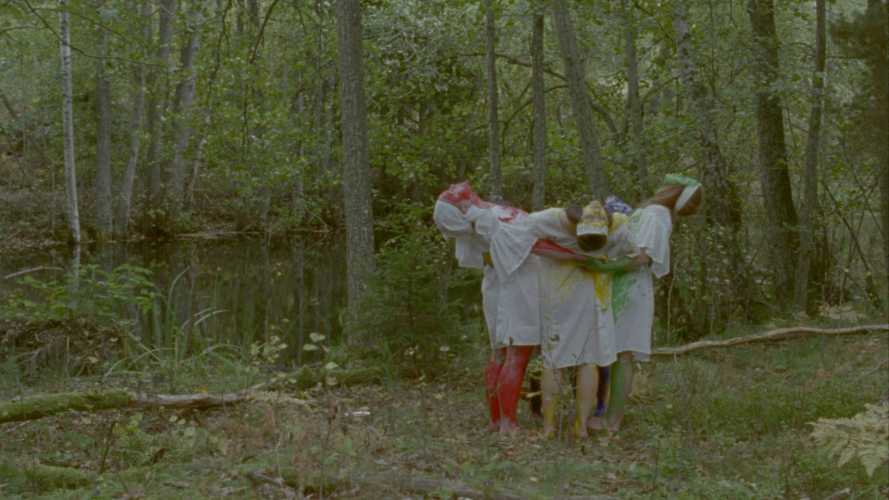 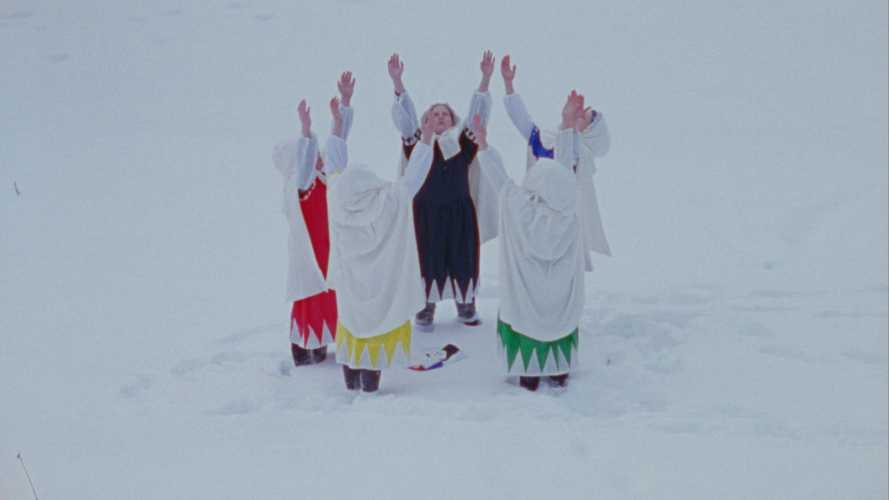 Dream Family was made as a final project during Byrnes studies at the Royal Institute of Art, Stockholm. The film is also the result of Byrnes venture into creating a cult of her own. Heavily influenced by occult imagery, and with an unhealthy interest in new religious movements, primarily of the 1960 ́s, Byrne put together a group of five women. These women were not entirely aware that Byrne was creating a cult. Byrne committed to sewing robes and other ritual garments for the five women, as well as choreographing rituals which the women acted out. Byrne wrote and composed music that the women sang. She gave them new names – each corresponding with a color. Thus the women became Black Dream, Red Dream, Blue Dream, Green Dream and Yellow Dream.

In the film, the new names are ritually applied by the women on themselves by smearing their bodies with the color of their respective name. The film continues in this manner, as it depicts a series of rituals, ceremonies and movements performed by the five women. There is no real narrative or chronology, except the changing of the seasons serving as a back-drop. We are never invited into an explanation of the actual beliefs of the group. What are they doing and why? But do we really need to know this to be moved by the visual language of religiosity? The robes and dresses. The synchronized movements that bodies perform. The symbols and objects. The singing. Byrne does not think so. She is herself a spectator, an outsider to any type of religious belief. In Dream Family, she appropriates a visual language of religiosity that has moved her, enchanted her in an otherwise disenchanted world, and she makes this language her own.﻿

Nadine Byrne (*1985, SE) is an artist and composer whose
interdisciplinary artistic practice spans across sound, sculpture, performance and video. Her work explores themes of memory, grief and loss as well as the inherent language and history to be found in materials and gestures. Byrnes practice is also informed by a fascination for visual and social manifestations of alternative constructions of reality.
In her cinematic work she incorporates the idea of the gesamtkunstwerk, Byrne creating the costume, set design, choreography as well as the soundtrack and often letting them spill out from the video work and into a spatial installation, sometimes further activated by performance.

Byrne lives and work in Stockholm and received her MA from the Royal Institute of Art, Stockholm. She has exhibited and performed internationally, most recently at places such as Bonniers Konsthall, Stockholm, Malmö Konstmuseum, Malmö, and CPR2, NYC. 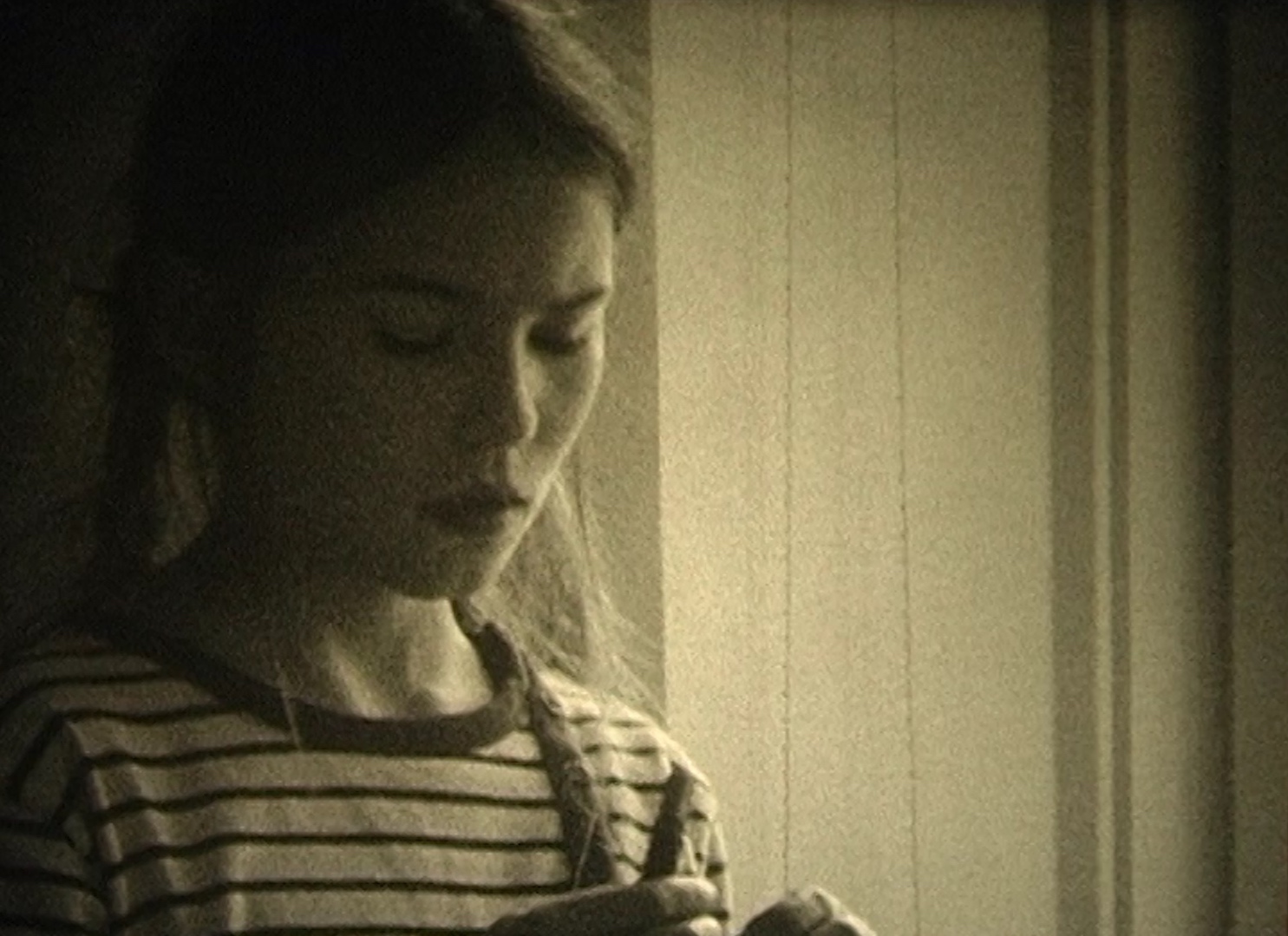 And The Sky so Present and Near 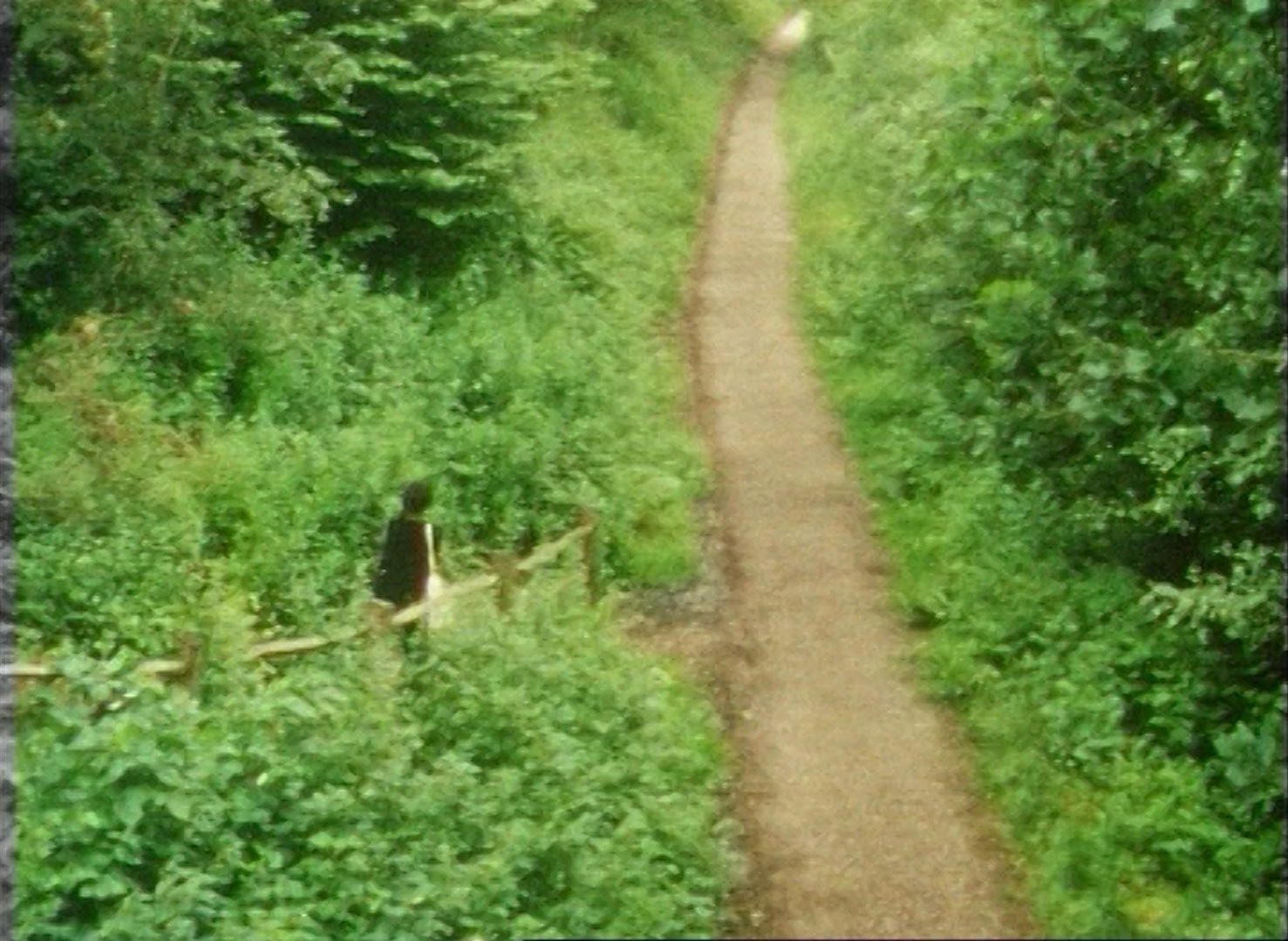 How Pure is The Journey? 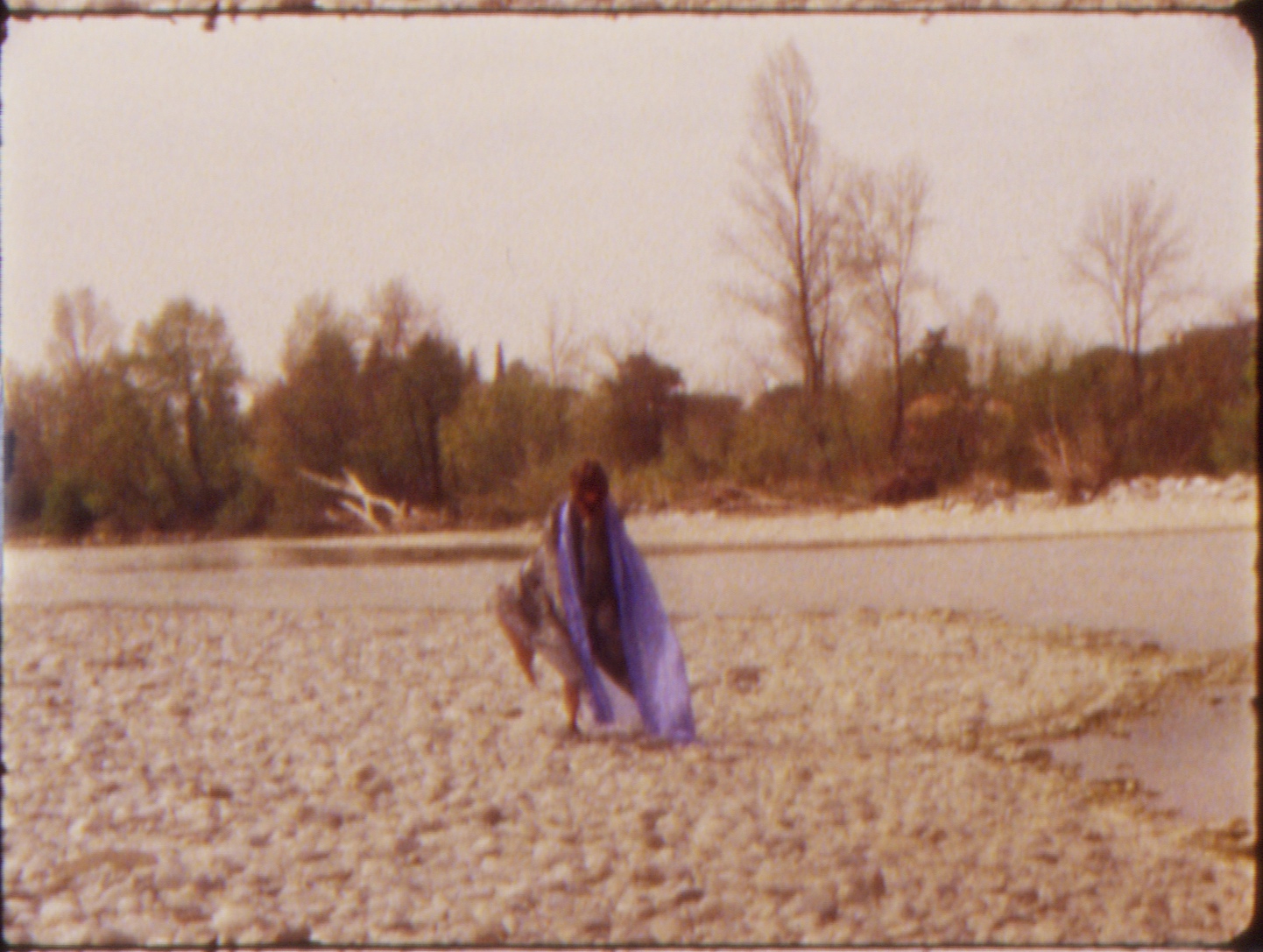 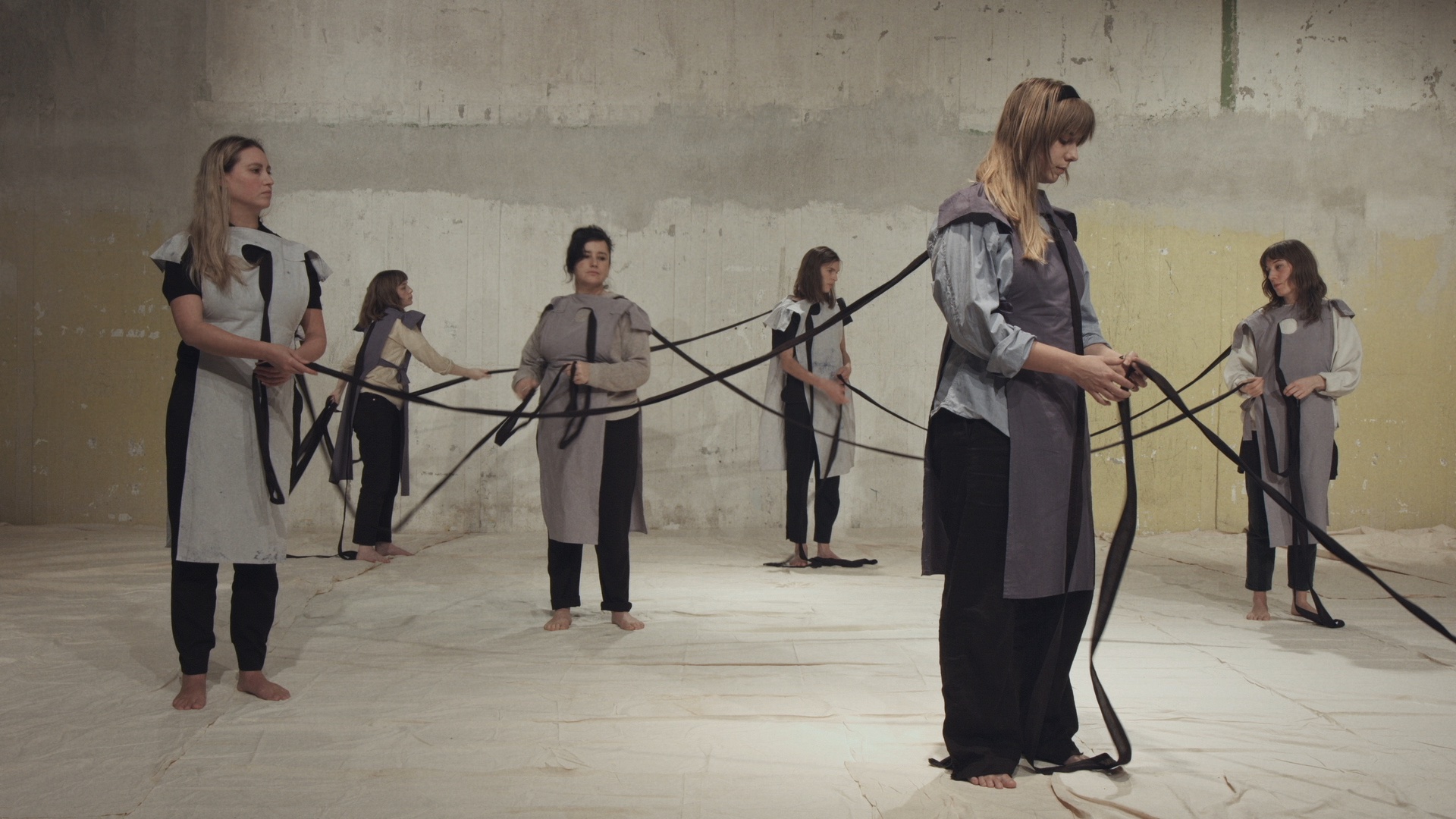