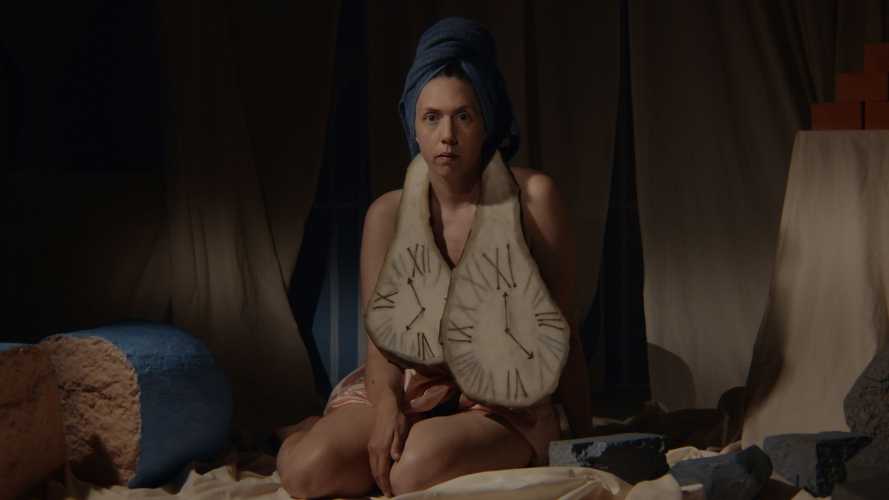 The Average
BY
Iris Smeds

The Average is a short film that with a surreal narrative takes on the notion about how the increasing measurability in our society forms us. In a time when our own fire should be greatest – where we constantly compare ourselves to each other – are we all still part of the same mean value?

The Average wants to use the mean value as a way of talking about human existence. What happens when everybody wants to stand out from the crowd? What is the total sum of our unique value? In the film you follow the association threads of the average in different chapters with visual nodes in the form of Dali’s melting bells, a centipede that breaks in two and an Ikaros who no longer wants to burn.

With the film Smeds creates a new mythology and language of symbols to embody the tale of the average. In previous works she has touched on the individual’s marketability and the narrative of neoliberalism – the success story in distinguishing oneself from the mass and striving upwards. The underlying idea of what constitutes an average value is the basis of the project, but the story is more suggestive than political and rather approximates what is human’s bodily and existential mean value.

The film is the realization of an aesthetic vision in which surrealism, society, poetry and politics are interwoven. It has also been a way for Smeds to develop a new working method where the boundaries between script, props, sculpture and performance are loosened up and tied together.﻿

Iris Smeds works with issues regarding identity as merchandise and art as entertainment. Her projects often take form of video pieces and public performances. It deals with comparing the monetary and spiritual value of art and human kind – and is elaborating with surrealism and poetry as method for idea production. Aside to her other practice she is also performing with her one-woman punk band Vaska Fimpen.

In her latest project The Average, the average is used as a yardstick for human existence and striving.