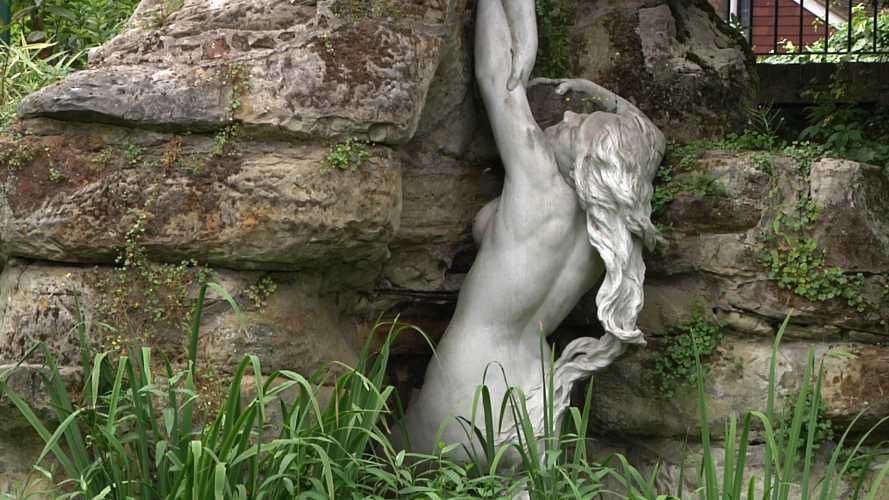 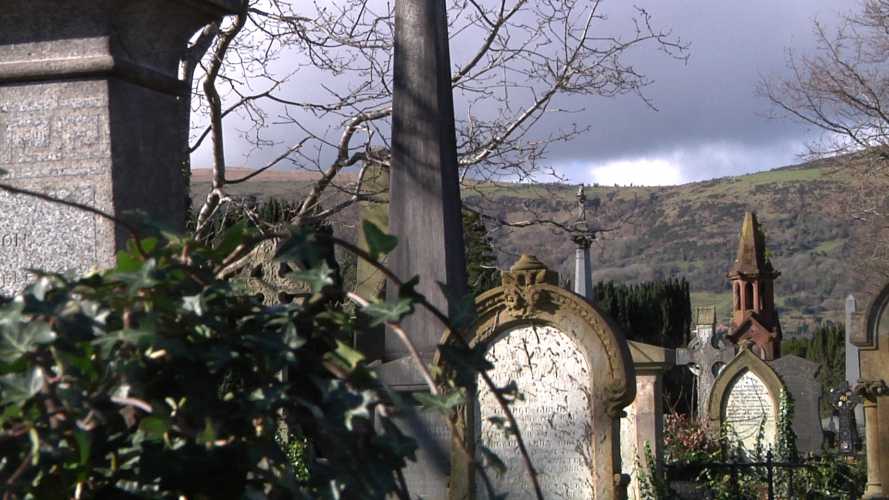 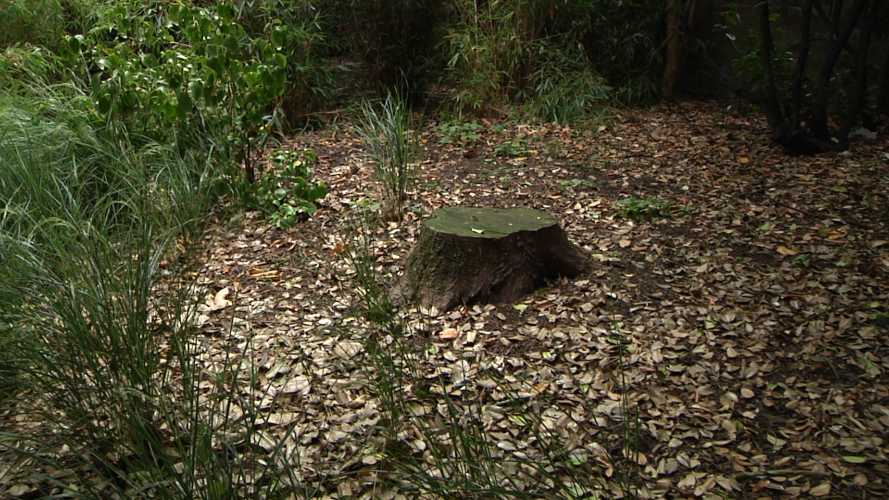 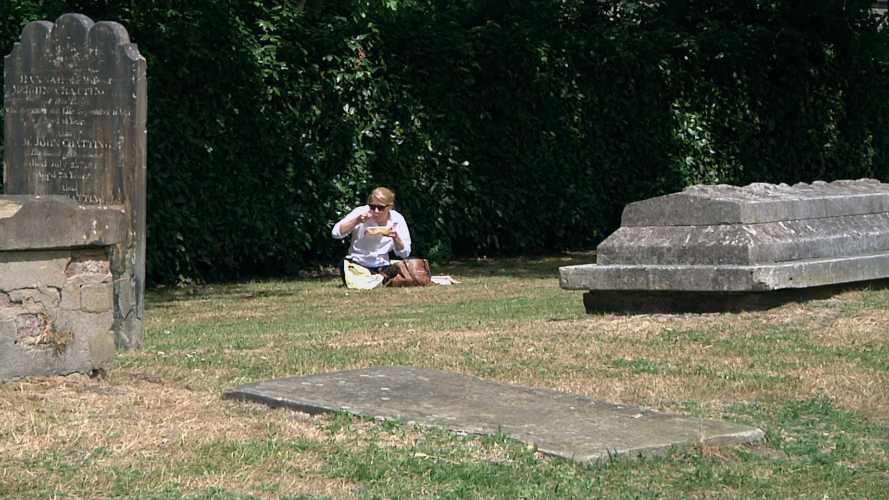 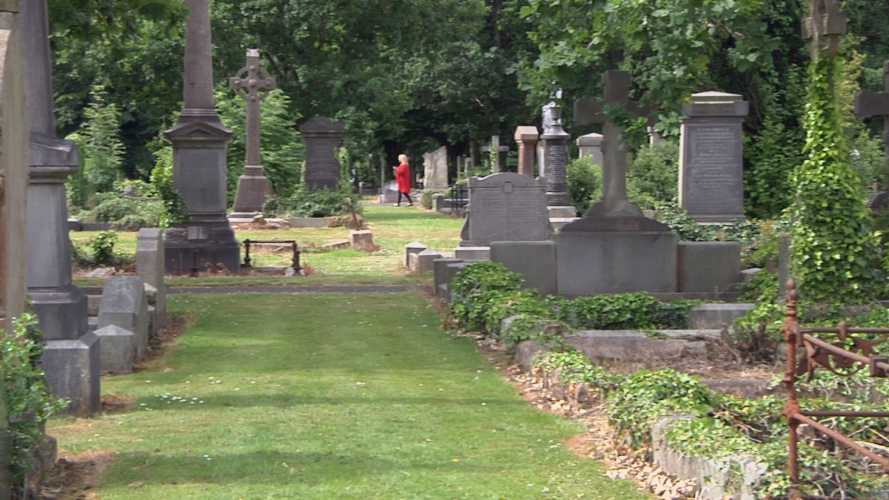 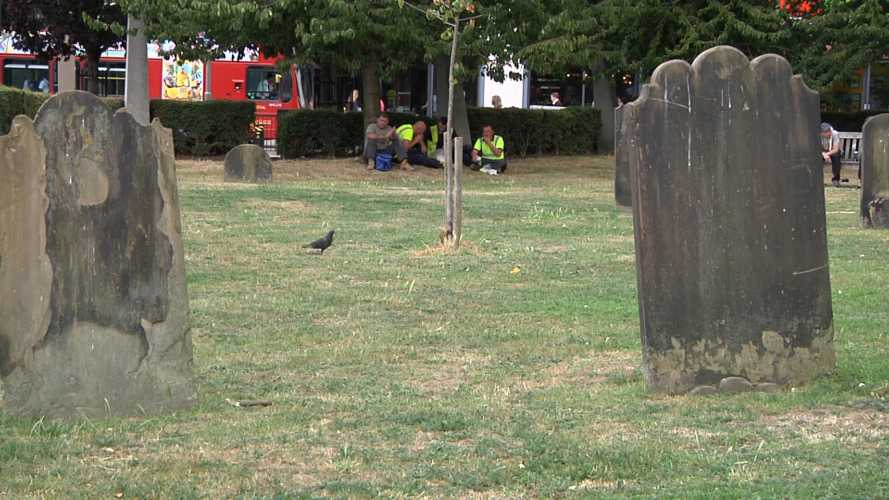 Necropolis uses the imagery and history of the cities of the dead to try and understand the death of the city of the living. It began as a film portrait of Belfast, conceived after the financial crash of 2008. It asks us to unpick our binary thinking about death and the city: only once we do this can we see the death all around us in our slavish occupation of the city of endless, moribund production; and only when we realise that we must escape this, will we start to see the freedom in the city of the dead.

Shots from eleven different cemeteries, burial grounds and graveyards, in Belfast, Berlin and London, are edited together to suggest that we are watching one continuous, single space. We track down long avenues between graves and linger on natural features: flowers, bare branches, lichen on stone. Silhouettes of headstones crowd at the bottom of a grey sky, branches and man-made structures intermingle.

The voiceover mixes original material with excerpted texts, run together as if they are the rambling, didactic thoughts of the narrator. A personal dimension enters. Characters start to appear in the locations, almost incidentally, at the very end of a pan, or in the far distance. These figures ‘inhabit’ the spaces filmed, performing simple, everyday actions.

The combination of the voiceover, the continuous ‘location’ constructed in the edit, and the presence of these everyday figures normalises the space: it is no longer morbid or melancholy, but living. Someone sits over a hurried lunch, another uses a laptop, a woman reads a letter. The ‘living’, everyday city seems to reorient itself in relation to the city of the dead at its edges.

Necropolis shows us that the cities where we live, work and love have become uninhabitable, filled with the decaying monuments of a dying social order. It asks where, and how, we will live.

Daniel Jewesbury (b. London 1972) studied Fine Art in Dublin and then moved to Belfast, where he lived for over 20 years.
Belfast remains a highly fragmented city, whose social and class divisions have only been heightened by the rapid capitalist redevelopment deemed necessary for ‘peace’; it was here that Daniel became interested in the workings of urban regeneration, and the many ways in which we are excluded from the capitalist city. This is a subject he has explored in film and video, in photographic projects, and in his writing. Initially these explorations were related to specific histories and geographies in Belfast, but in the last decade Daniel has studied processes of neoliberal capture of space in cities across Europe. Apart from film, Daniel also works with photography, performance and text, and is currently completing an artist’s book, Looking at the Woman in a Bomb Blast, which puts forward a new reading of the histories of violent sexualised imagery in Western art.