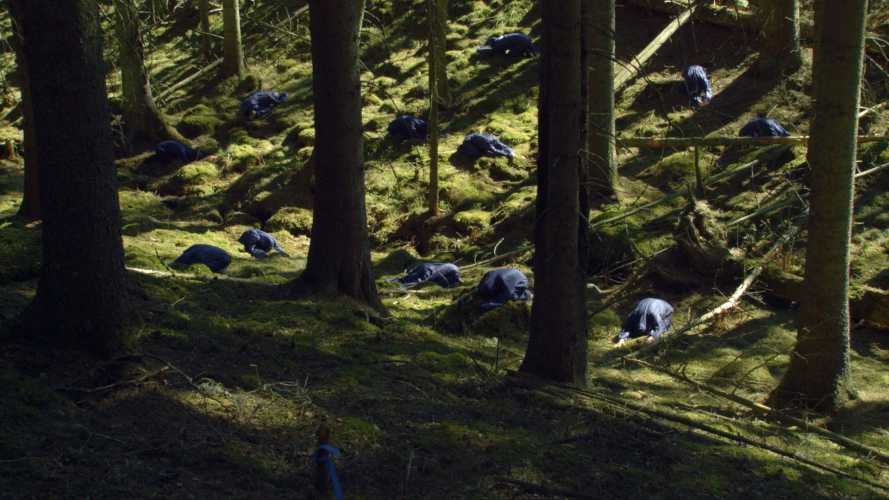 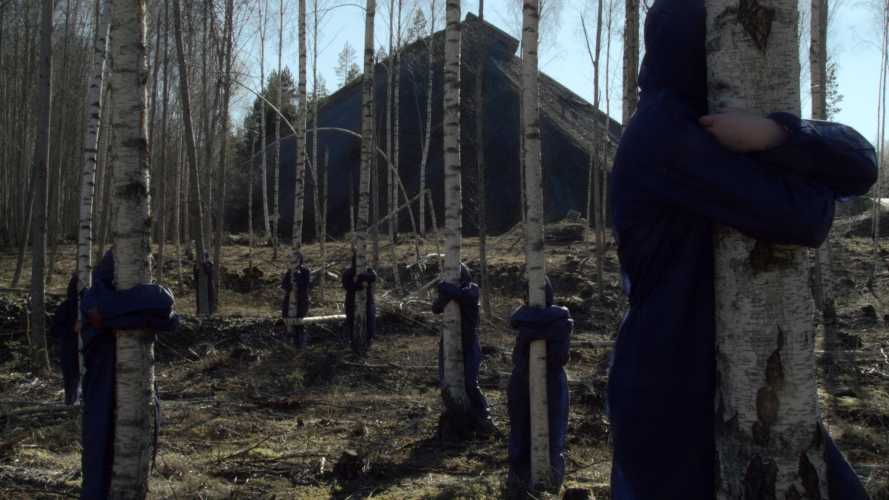 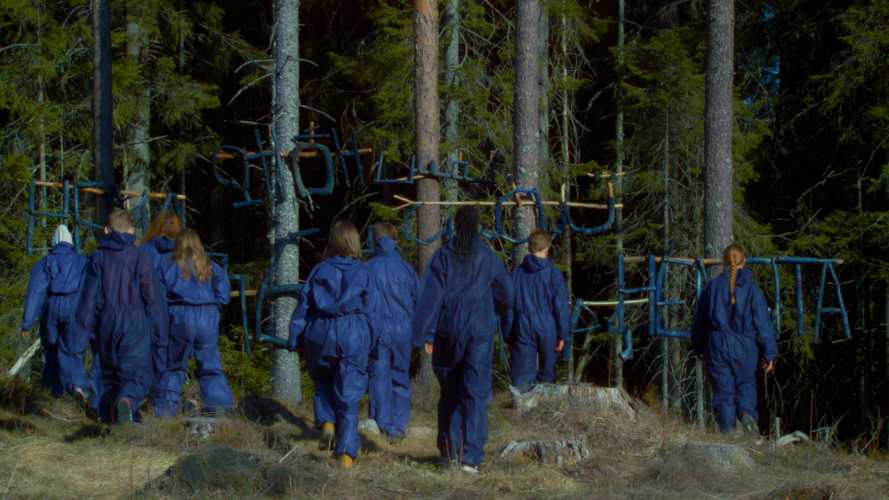 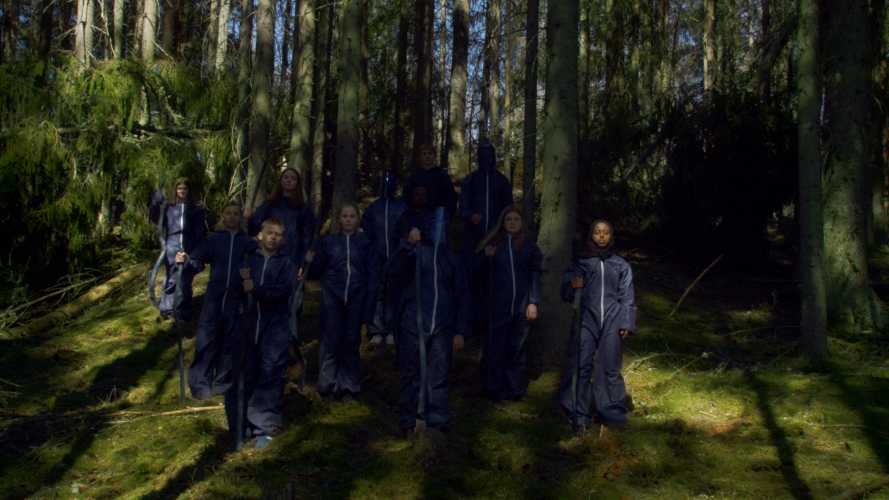 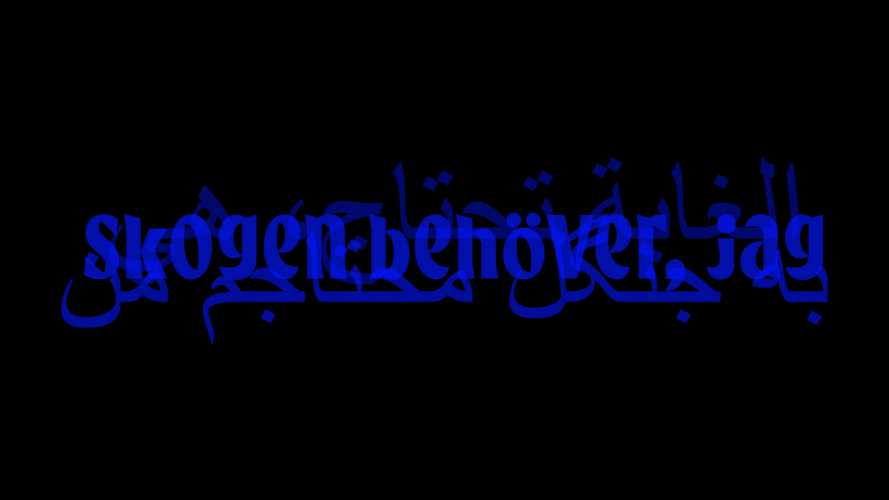 In the video- and soundwork ‘skogen behöver, jag’ (forest needs, I), the utterances of the forest form an entryway to the act of listening as an acutely necessary practice of art, poetry and politics in contemporary times. Concrete sounds from the forest have taken new body through digital adaption and synthesizers. Hovering in disparate directions, it drifts through a blue-green ambient landscape in which bodies; voices, breaths, words and trees are woven together only to be untangled again. The work simultaneously executes a remark on the closing of Sweden’s borders in 2015 when the prime minister stated that the nation needed respite, a word that in Swedish is historically known to signify the protection that refugees seek, but also to name the forest. In the video, the question of whose breath is worth to take into account echoes amongst the tree branches, as borders are being both accentuated and transgressed.

Only 800 inhabitants live in Storå but the village is, despite its smallness, a site with vast movement, since it is also one of the first arrival points for many newly arrived refugees in Sweden. In the process of making the video, an adjacent nature reservoir named Gränseskogen, The Border Forest, established a starting point for an investigation of these two sites, exploring the movement either enabled or disabled by demarcations. In collaboration with 40 participants, Hanna Wildow has intertwined a multilingual tale about the border against the world both outside and inside; in a woody borderland where other realities grow possible.

skogen behöver, jag (forest needs, I) is a collaboration between artist Hanna Wildow, cinematographer Adam Nilsson, musician Johan Wahlberg and 40 pupils from a small village of rural Sweden called Storå, a place that also hosts one of the largest refugee arrival points of Sweden.

Hanna Wildow, born 1983, lives and works in Stockholm, Sweden. In her practice, she explores construction of history through language, sound and body. The works are often rendered through collective processes and participatory methods, attempting to challenge which narratives that are approved of as knowledge. With a desire for interspaces, breakages and gaps; her works search for warped spaces and errant narratives.

Hanna Wildow got her MFA from Konstfack University in 2015. Since then her work has been shown at Stripa Gallerirum, Konstfrämjandet Bergslagen, Something Else Off Biennale, The Grandmother Film Festival, hangmenProjects, AHRA International Conference, Stockholm University of Dance and Circus, ccap, ArkDes, Participant Inc., London Biennale MANILA Pollination, Charles James Gallery ,and Human Resources Los Angeles. She has self-published two online-archives, been published in Ordkonst, Haunt Journal of Art and Kritiker, and received various grants and residencies.

Born in 1974 in Umeå, Sweden. Currently based in Stockholm, Sweden

Adam Nilsson is a Cinematographer and a filmmaker. He has a Degree of Master of Fine Arts Specialisation Cinematography (Stockholm University of the Arts)

Parallel to Nilssons own work as a cinematographer/filmaker he is collaborating with artist like Martina Hoogland Ivanow (Interbeing, Annelise Frankfurt) Annika Eriksson (Exercise for a psychodrama), Youlian Tabakov(Tzvetanka), Anna Koch (Another pavilion), Johan Söderberg, Hanna Wildow, (forest needs, I) Karina Holla ( On the One Side, the Skull, on the Other side the World and You)