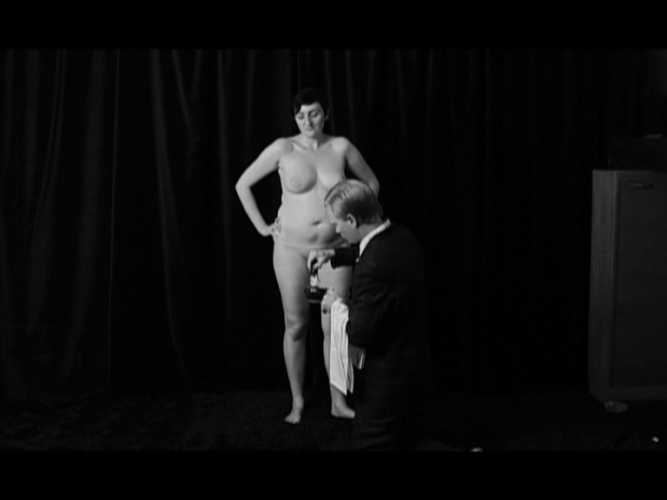 Shaving the Baroness
BY
Lene Berg

Shaving the Baroness is not a reconstruction nor a remake. In fact, it is a restaging, a reenactment of a film that was reputedly made in New York in 1921 by Man Ray and Marcel Duchamp with Baroness Elsa von Freytag-Loringhoven. That film, Baroness Elsa von Freytag-Loringhoven shaving her pubic hair, was most likely never shown as Man Ray and Marcel Duchamp ruined the negative during development.

Although my film Shaving the Baroness is based on varied sources that describe what the original film may have looked like, the end result is probably quite different from what was planned. Apart from one surviving still image, my sources were predominantly written, and written words and moving images are two entirely different media. In addition, the written descriptions of the film do not always agree with each other, they are clearly contradictory about the authorship and the artists’ process. What I have learned is that they probably used two cameras and most likely Man Ray acted as the barber with an anonymous third man present. But obviously, Shaving the Baroness is also different from the original movie because I did not have access to the original cast and I did not search for an actress to play the Baroness. I wanted someone to be there as herself, doing what the Baroness did, or is said to have done in 1921. Even if the situation would be totally staged and controlled, I wanted to see something real, something which I could not instruct and which would not be an imitation.

Shaving the Baroness can be seen as an homage, but the decisive factor in making the film was the central idea that has to do with the essence of moving images. It shows a unique moment where the past and the future are not important. It involves a certain risk and a certain ambiguity. The main character is transformed, yet no story in the conventional sense of the word is taking place. The situation is intimate, and the experience would normally not be possible to share with others unless it was documented. And even if what can be seen already belongs to the past, it will always take place in the present when the film is screened, be it a hundred years from now or a hundred years ago.