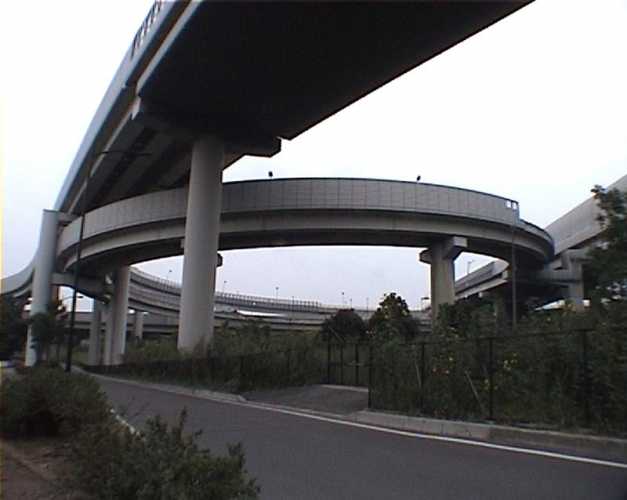 Tokyo Metropolitan Expressway, 2001. Apart from being a network of expressways connecting the city center of Tokyo with more remote districts, Metropolitan Expressway is also a series of photographs and a video installation by Jesper Nordahl. The distinct profile of the expressway has been caught in the camera’s eye as it cuts through the cityscape, embodying yesterday’s visionary conception of the future, which first emerged at the time of the Olympic Games in Tokyo in 1964.

According to the ‘Annual Report 2000’ of Nihon Doro Kodan/Japan Expressway Public Corporation, this expressway system not only respects topographical and geological conditions (each section of the expressway being built to withstand earthquakes), but it also respects inter-human and environmental relations, with high-level traffic security, soundbarriers and underground tunnels, when necessary. Tokyo Metropolitan Expressway is a kind of architectural archetype, and such items have been fascinating for Jesper Nordahl in other cases, resulting in several series of works. One example would be the series on the practical conglomerations of gas stations and mosques (Gasoline and God, 2000), or the documentation of buildings in the Latvian city of Karosta (2001), once a Russian military port, today a place for free trade.

Since 1993, this city has been the object of a project called ‘CCMS’ (Committee on the Challenge of a Modern Society) – however with the grim addition: ‘clean up project’. These places are all characterized by somehow being in a state of political, economical, or cultural transition, places where the architecture sometimes reflects its surroundings, and sometimes not. According to Nihon Doro Kodan/Japan Expressway Public Corporation (section ‘Process of Construction’) it normally takes 10 to 15 years to complete the construction of an expressway.

At present, after nearly forty years, 128.4 kilometers of the express way are still under construction. In spite of this, Jesper Nordahl’s photographs do not provide the viewer with any sense of transcendence, they don’t tell us that the expressway will have changed dramatically when the photographer next returns to Japan to resume his documentary work. The photographs and the videos are always done by using a stationary camera and in static profile: you never experience the feeling of the intensive circulatory system that the Tokyo Metropolitan Expressway constitutes in the city. The works become a stubborn and formally conscious portrayal according to vertical and horizontal coordinates, with the sky as an ever present and final backdrop. In Delirious New York (1978), Rem Koolhaas praises the city for having finally replaced nature with artifice. With its ‘incomplete’ (perhaps ‘incompleted’ would be a better word) and vertically ascendant topography, Tokyo Metropolitan Expressway displays qualities that also could be found in Koolhaas’s ‘Generic City’, but it undoubtedly belongs to reality, and Jesper Nordahl’s photographs underline this fact once more. Mats Stjernstedt is Director of Index in Stockholm.