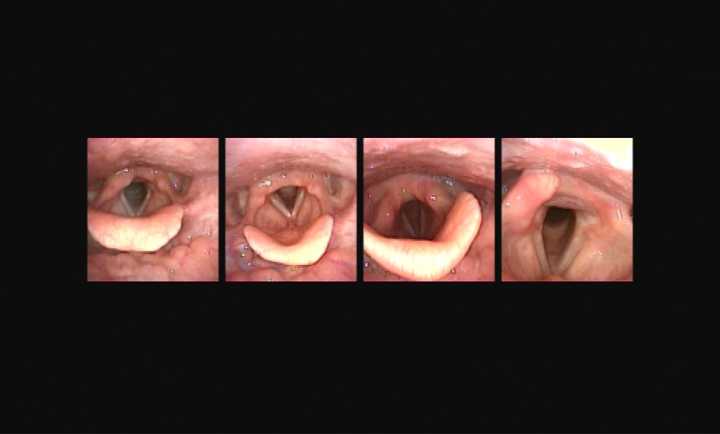 Cords (hear us and have mercy)
BY
Sara Lundberg

Lundberg has filmed the vocal cords of four singers. The song is ‘Kyrie’ from a mass written by Thomás Luis de Victoria (1548-1611). The angelic song is juxtaposed by the fleshy images of the working vocal cords. The artist is interested in our concept of God, how it has created our ideas about moral and ethics, our relation to our bodies (especially the female). Shame and honor, the grotesque and the sublime.

Sara Lundberg is an acclaimed artist and writer. She received a Bachelor of Fine Arts at Mc Daniel College (1991-1994). In the year 2000 she studied animation at the University College of Arts Crafts and Design in Stockholm and in 2008 she enrolled at the Royal Academy of Fine Arts, as a project student, specializing in video.

She has illustrated more than 20 children’s books. Her debut as a writer was in 2009 and she was nominated to the August Prize for her story Vita Streck and Öjvind. In 2010 she won the said prize for Skriva Om och Om Igen and in 2012 she was awarded the Elsa Beskow Plaque. Her art has been exhibited in galleries and art museums both in Sweden and internationally. Her last exhibit was at the Gothenburg Museum of Art.