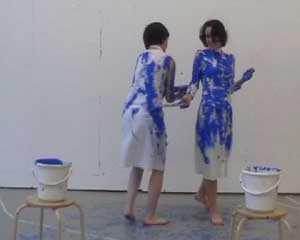 Sisters Are Doin’ It
BY
Magdalena Ljung (fd Dziurlikowska)

The video begins with a fight where brushes and paint are used, which turns into a collaboration to apply paint. The blood in commercials for sanitary towels is blue. Yves Klein painted blue women and now, when he does not exist we keep on doing it ourselves. We uphold old power structures and we enjoy it! The music is Annie Lennox’s song ‘Sisters are doin’ it for themselves’ on 78% of the original speed. The music is punctured with laughter and screams. The low speed of the music suggests that the feminist project is coming along slowly, while we paint eachother quickly.