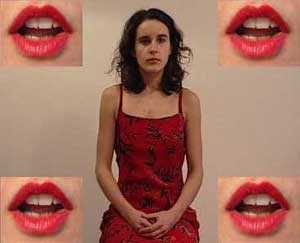 A woman listens to what four mouths are telling her. They ask questions, they make exhortations and confessions. The quotations are taken from weekly magazines. For example: ‘Who are you? Make your own wraps, I sailed around the word’.