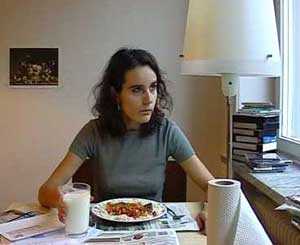 I sit down and eat while my own voice is nagging at me. It says what I should do and what I have done wrong. The flow of words is divided into headlines like employer, mother, dentist, cohabitor… The headlines are shown in front of my face. ﻿